As a company that thrives in the middle of mayhem, we are always grateful for our extraordinarily talented, smart beyond smart and solution oriented partners on a project. Let me paint the picture for you in a Special Event environment.

The transformation of a ballroom is fully underway. A large stage has been built and dressed at one end of the room. Video screens are hung and wired. A member of the crew is placing TelePrompTer and confidence monitors at the downstage edge and back of house. The lighting trusses are up and a tech in a Genie lift is onstage focusing lights while a Lighting Designer roughs out cues for what s/he thinks is coming his or her way. Meanwhile at the back of the room in Tech Village, PowerPoint, Keynote, HD video, music and various other media files are loading into computers while stakeholders responsible for content create a stream of calls, all with apologetic stories about why the rest of their stuff isn’t there yet. Sound familiar? It’s all coming together, sort of, but pieces are missing. We’re T minus 30 for an Executive read through followed by a talent rehearsal and we just got word the talent is on a plane delayed by weather and we have no idea when to expect them. And, oh yeah, one of the Execs has arrived 30 minutes early and needs to rehearse right away, and his “person” has script changes…a lot…for the TelePrompTer script. And there’s still a Genie lift in the middle of the stage.

Here’s where amazing partners come into play. The ones who know how to make a trip to the nearest Starbucks sound like an adventure the early Exec won’t want to miss. If you have flexible, smart people, it isn’t hard to flip an entire rehearsal schedule so that everyone gets what they need, perhaps in a slightly different order than originally conceived. It’s the rollercoaster that is inherently part of a Special Event project and it can be extraordinarily rewarding to take what looks like mayhem, and quickly transform it into something organized, cohesive and brilliant! 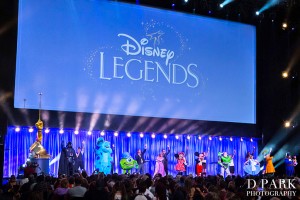 We recently had the pleasure of working with several amazing partners on the Disney Legends Ceremony that took place as part of D23 Expo in Anaheim, CA. The Disney Legends Ceremony has historically been the first large production to perform on the Main Stage at D23 Expo, so we were accustomed to having an entire day to iron out the kinks. This year our rehearsal allotment was two hours. Yikes! But thanks to the support of Kevin Traxler from Disney Corporate Creative Resources; the brilliant and detail-oriented Hollie Hopson, our Production Stage Manager; the flexibility of Bill Wylie and his team from the Disneyland Character Department; and the amazing Laura Dickinson and her group of A Cappella vocal artists from Vybration (and if you don’t know who they are, you should! Google them! Wickedly talented and amazingly easy to work with.); we managed to rehearse all elements, conduct a cue to cue and finish our rehearsal 20 minutes early. Teamwork and a passion to not only do things well, but do things well with grace and a sense of humor – that’s what made the Disney Legends Ceremony and many others like it a resounding success.

So when we see mayhem, we say, “Bring it on!” Because where others might see chaos, we know a few people who see things the way we do; a scene waiting to be organized into cohesive brilliance, all done with detail-oriented passion, grace and a sense of humor.